Very pleased with the turnout to our magic show at The Waldorf School of Cape Cod, Saturday evening, January 28th. We were able to call upon both the technical theater and performing expertise of The Amazing Richard (Rich Archer) to make the show a success.

Our two third grade students, Juliana Earle and Jamie Goldbach, impressed us with short routines of their own, in which they made a dove appear and a student’s briefs disappear. 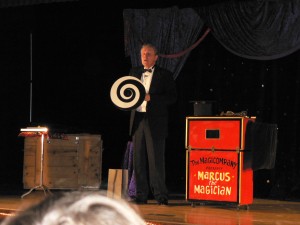 Marcus plays with the mind.

The Amazing Richard adds to the comedy.

We helped the school raise over $2000 toward the schools new gymnasium floor!

About the Author: Marcus